“All it takes is one experiment to turn the universe on its head.”

There’s no scientific reason why time goes forwards. And, after her Dad’s funeral, Lucy is determined to prove that it doesn’t have to.

Lucy’s partner Phil finds himself dragged into her experiment, as she tries to rewrite the rules of the universe from her kitchen, using Einstein’s theory of relativity… and a lot of burnt toast.

Supernova is a moving and funny new play about love, grief and Physics.

Writer Lizzy Mansfield is currently writers’ assistant on Ted Lasso. She was part of BBC Comedy Writer’s Room in 2020-2021, and her work screened at Cannes Film Festival 2019.

Award-winning director Fay Lomas’ work includes three of the dramas for the Assemble Here audio project for Theatre by the Lake, The Girl Who Was Very Good At Lying (Omnibus Theatre; Nominated for an Offie for Best Director); Land Skeins (winner of OnComm Award 2022) and shows at Rose Theatre Kingston, Royal and Derngate Northampton and Arcola. 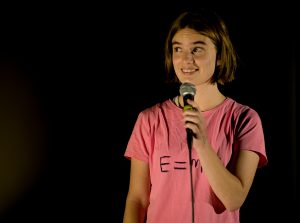 10 key differences between a supernova explosion and a fork

Theoretical physicist Dr Fran Chadha-Day takes a witty, irreverent, and occasionally surreal look at the world of particle physics. What do theoretical physicists do all day and is there any point to it? What really goes on at the Large Hadron Collider? Can you spot the difference between a supernova and a fork?

Fri 15th July at 7-7.20pm with Francesca Chadha Day who is Assistant Professor in Physics at Durham University

Lucy
Adeola Yemitan is an actor based in London. She trained with the National Youth Theatre and most recently appeared as Ursula in Much Ado About Nothing (RSC, 2022). Recent credits also include Antigone in Antigone (Mercury Theatre, Colchester, 2021).