A Panorama of Everest by Tim Mosedale

Tim Mosedale, who runs Everest Expedition, has created these panoramas of Everest and they really highlight the beauty and majesty of the Himalayan Mountain Range that will feature in our upcoming production, The Climbers 17 Jun - 16 Jul.

In conjunction with Thomas Worbs of Mountain Panoramas Tim developed some very exciting, interactive, 360° panoramas from various sites around The Everest region. These are very high definition and when viewed on a laptop you can scroll around, turn on labels and zoom in. Alternatively they are interactive when viewed on a smartphone.

Just click on any of the photos below and a new browser will open. Enjoy the show and prepare to be impressed.

Over to Tim to explain and let’s start with the highest! 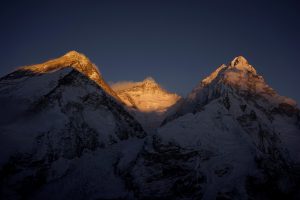 Well you don’t get any higher than the summit of Everest. It has been a long process which has involved multiple ascents of the mountain with lots of gear and in various conditions. In 2013 my first summit was too windy and cloudy my second summit was in the dark. 2014 and 2015 were years when all expeditions were aborted on the S side because of multiple fatalities (sera fall in 2014 and earthquake in 2015). In 2016 it was crowded. In 2017 it was too cloudy again. I didn’t summit for a variety of reasons in 2018 and 2019 and Covid stopped all expedition in 2020.

Eventually, in 2021, I got to the top with reasonable conditions and no people and was able to snap a whole bunch of photos that have been stitched together to form a banner from Lhotse (the mountain next to Everest and the 4th highest in the world) all the way around to Changtse in Tibet, which looms over the North Col.

These things never just happen overnight but I would never has guessed that it would take quite this long to get a result.

Tim Mosedale has run several expeditions to Everest and has become a bit of an expert of what to take....

Cast announced for The Climbers

A World Premiere here at Theatre by the Lake!

Interview with Carmen Nasr – writer of The Climbers

Carmen Nasr is the writer of The Climbers - a World Premier. We caught up with her ahead of the...

Interview with Guy Jones – director of The Climbers

Guy Jones is the director of The Climbers - a World Premier. We caught up with him ahead of the...

Interview with Max Johns – Designer of The Climbers

Max Johns trained in theatre design at Bristol Old Vic Theatre School and was the recipient of a BBC Performing...