The Climbers on Catbells

The cast of the Climbers arrived in Keswick in May 2022. In their first week of rehearsals we took them up our local fell (mountain) Catbells, to test their 'climbing' legs. We're pleased to announce, they all passed the test!

Made up of a cast of 6, The Climbers is set to run from 17 June to 16 July at Theatre by the Lake. It’s a World Premiere production, written by Carmen Nasr and directed by Guy Jones, and it seems fitting that it’s making it’s debut here in the reputed home of British Rock Climbing, the Lake District, UK. 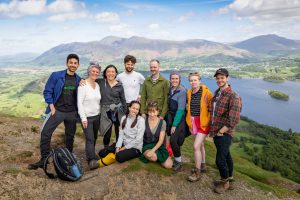 It was a beautiful day and the Lake District was really showing off it’s magnificent views and delivered the perfect weather for their summit attempt. The idea was director, Guy Jones, he used to come to the Lake District as a boy and had fond memories of climbing mountains and coming to the theatre with his family.

Photographer and videographer, Ben Barden, captured some moments from the day and we asked the actors a few questions, about their relationship with the outdoors and how they felt when they first read the script.

Cast announced for The Climbers

A World Premiere here at Theatre by the Lake!

Interview with Guy Jones – director of The Climbers

Guy Jones is the director of The Climbers - a World Premier. We caught up with him ahead of the...

Interview with Carmen Nasr – writer of The Climbers

Carmen Nasr is the writer of The Climbers - a World Premier. We caught up with her ahead of the...

Interview with Max Johns – Designer of The Climbers

Max Johns trained in theatre design at Bristol Old Vic Theatre School and was the recipient of a BBC Performing...